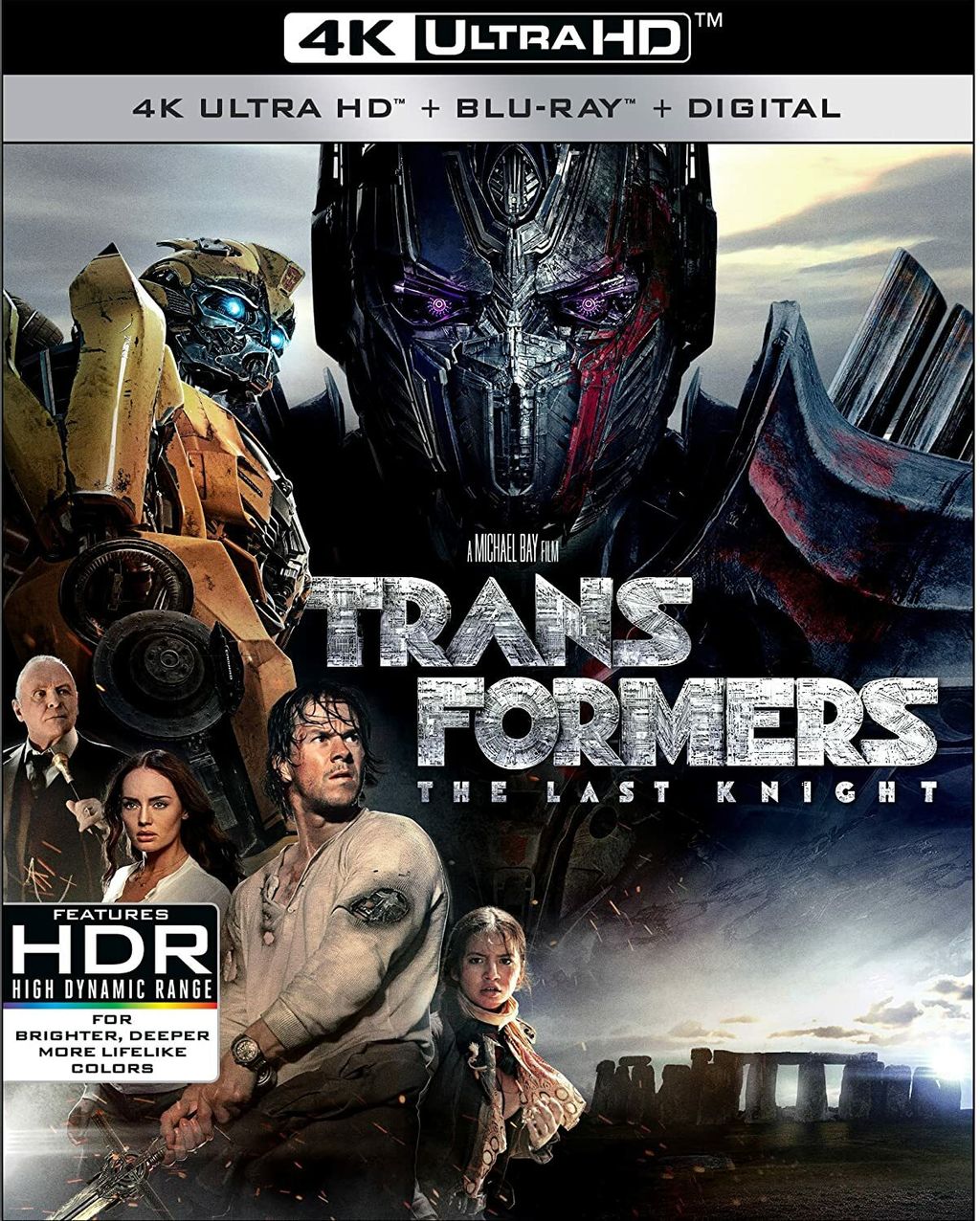 The digitally photographed Transformers: The Last Knight arrives on 2160p UHD sourced from a 2K digital intermediate. The disc includes both HDR10 and Dolby Vision color formats. Unfortunately, we are currently not able to review Dolby Vision but we are studying equipment options and will be upgrading in the near future. Paramount's upscaled 4K presentation offers a fairly standard uptick in image quality over the Blu-ray, which is itself very strong. There's a tangible increase in detail. Faces are a particular beneficiary, where pores and wrinkles and moles and facial hair appear more precisely defined and sharp. Environments and digital Transformer complexities enjoy a boost as well, but it's in human close-up where the differences are most noticeable. The UHD doesn't have quite the same sense of surface smoothness in some spots as the Blu-ray, though there remains a modest sense of flatness to the picture. HDR color enhancements give a little more depth to the already-hot Michael Bay palette. Flesh tones are deeper and, by extension, warmer. Lush English green grasses enjoy improved color depth, more nuanced and less showy but still plenty vibrant. Black levels hold impressively deep, perhaps most obvious during a flashback nighttime battle outside a Nazi-occupied building. Aspect ratios do shift throughout the film between various sizes, mostly around the larger format rather than a more infrequent ~2.35:1 ratio. Blu-ray.com's aspect ratio calculator measures an average of 1.90:1.

It's worth noting that playback proved troublesome beyond the usual "no signal" handshake issues I experience that are certainly equipment, not disc, related. The review Samsung UBD-K8500 player twice displayed an error message that stated "Cannot play this disc. The disc does not meet the specifications" when attempting to load from the home screen. Subsequent retires resulted in disc playback. The disc also froze up twice, both right at film's end, once at the 2:24:54 mark and, after restarting and skipping ahead to a few second prior to that timeframe, again at the 2:25:14 mark. So I was not able to view the very end of the movie on the UHD format. The disc appeared to have no significant wear or scratches, and was from a factory sealed retail copy provided by Paramount. It was more than likely limited to my disc rather than something that will be a widespread issue.

Transformers: The Last Knight's Dolby Atmos soundtrack delivers the goods. Fans expect an intense, layered, and clear listening experience from the Transformers series, and that's exactly what they get. The track really needs no review. It hits all the checklist points. Deep, robust, and robotic-pitched bass explodes with regularity, saturating the stage with an intense low end frequency. Surrounds run wild with flying debris, bullets, scuffling humans, lumbering robots, missiles, and all sorts of mayhem rushing through the listening area with precision, detail, and seamless immersion. Music is triumphantly potent, lifelike, and finely detailed throughout. The Atmos component is used with regularity. Merlin's greeting to the hidden Transformers in England, speaking into the empty engine that serves as an entrance to their makeshift hiding place, offers an intense reverberation. Haunting sounds around Cybertron linger about the top (and elsewhere). One of the best moments comes in a sequence midway through the film when the characters gather around the Round Table and Anthony Hopkins' servant robot Cogman sings and plays the organ; the sense of absolute stage saturation is amazing. The final battle delivers an onslaught of sound, most of which in some way engages the top end, often with intensity but usually in a complimentary, not discrete, manner. Dialogue is unsurprisingly clear and refined even through the chaos. If only the movie wasn't such a chore to watch; the track is amazing.