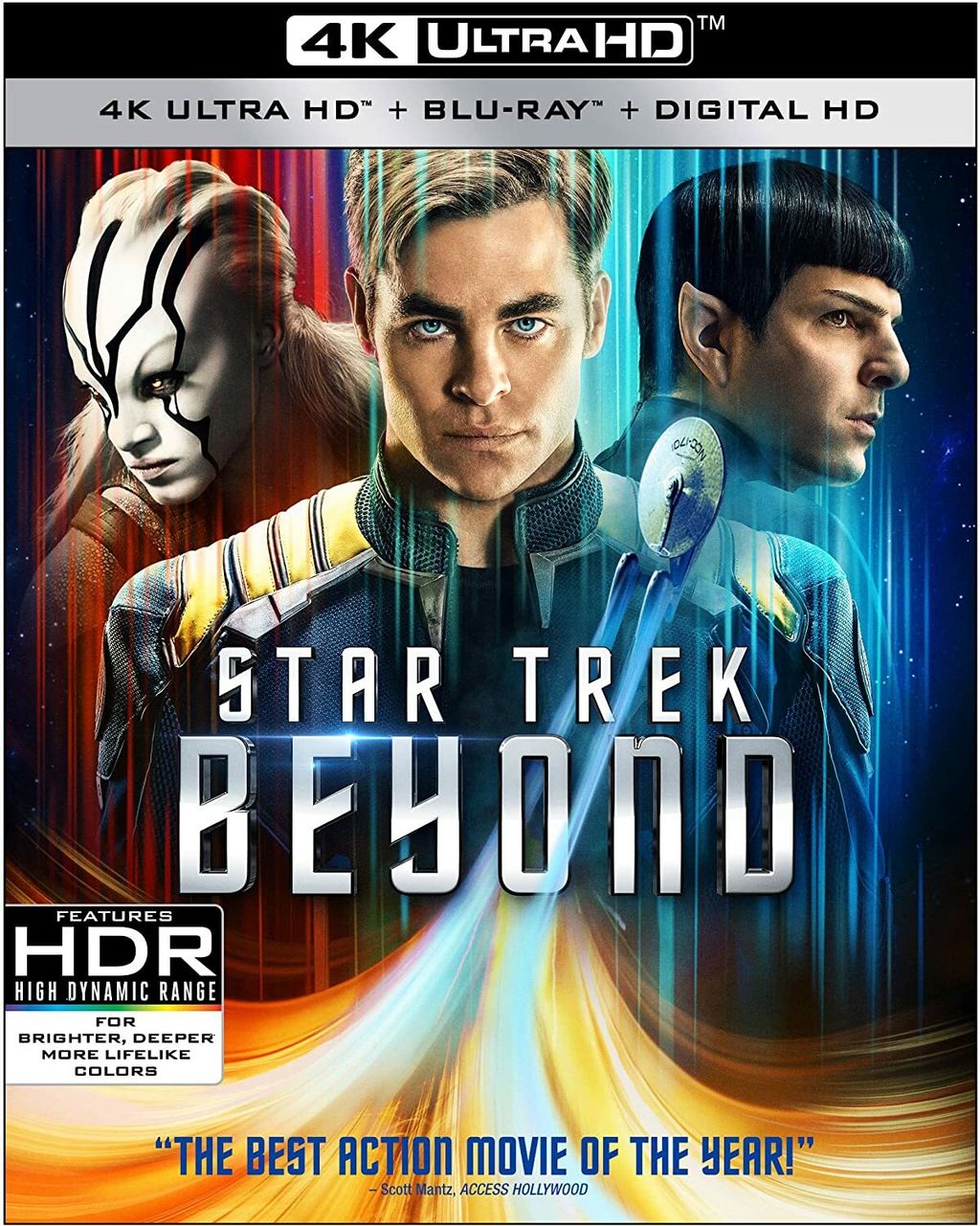 Star Trek Beyond beams onto UHD with a 2160p/HDR-enhanced transfer. Once again, "subtle" is the word of a UHD review. The film was reportedly primarily photographed at 3.4K and finished at 2K, making this an upscale-to-4K release. It's still a good little improvement over the 1080p Blu-ray. Textures are noticeably firmer, even before making a direct A-to-B comparison. Facial details are upped to the point that smaller complexities even at medium distance are finer and sharper. By comparison, the matching faces on the Blu-ray can look almost smeary. Textural details on uniforms are terrific, too, whether the jackets some of the crew wear on the planet surface or even the relatively boring starship tops they wear on the Enterprise. The difference is evident whether on the clean and bright-white Enterprise, in brightly lit locales on the planet surface, in darker recesses and low light interiors, or the slick Yorktown star base. Colors are gorgeous, with the blue crew shirts the true standout. Scenes featuring Spock and McCoy on the planet are amongst the finest in the movie; they're often bathed in natural light and the shirts look fantastic with the punchy blue making a big impact. The color is a bit more refined and nuanced on the UHD, but again not by any serious leaps and bounds. The image on the whole presents with a little darker contrast, too, but never to the point of devouring a scene. Black levels are fairly good, perhaps a bit too bright and gray where they should be deep and detailed. Flesh tones appear flusher and more natural. Here, the HDR color palette definitely falls into the "refinement" category rather than the "alteration" category. This isn't a knockout UHD, and those who only watch the Blu-ray aren't missing out on a major boost, but UHD owners will appreciate the finer point upgrades it has on offer.

Star Trek Beyond warps onto Blu-ray with a proficient and generally exciting Dolby Atmos soundtrack. The presentation begins with a quality example of how the added overhead channels can enhance a scene. Kirk is playing the role of mediator between two alien factions that don't like one another very much, and similar to the trial that sent the elder Kirk to Rura Penthe, he's standing in a very large, vertically stretched chamber that allows for some rich reverberation that essentially puts the listener in his shoes. The track further expands moments later with a barrage of nifty sound effects and accompanying bass that set the tone for the track (and set the story in motion) while offering a good sampling of what the track can accomplish. Action scenes are wonderfully complex yet smooth and detailed. Explosions, phaser blasts, falling debris, and other all-inclusive action details are perfectly meshed together with seamless 360-degree immersion and a complimentary top layer that, beyond a few moments, never dominates the proceedings but rather enhances them a great deal. One of the best moments in the film, and a strong Atmos reference moment, comes when the top layer of the stage seems to roll with the sound of heavy wreckage as the shot pans around at the 48:20 mark. Likewise, dripping water seems to plop from the ceiling in a cavernous enemy compound at one point. Immersive din is enjoyable on the bustling streets of Yorktown. Music, whether score or popular, is smooth and detailed throughout the range, and plays with an enveloping flow around the stage. Dialogue is clear and detailed, well prioritized and comfortably focused in the center channel, save for when the track naturally expands its placement for effect.