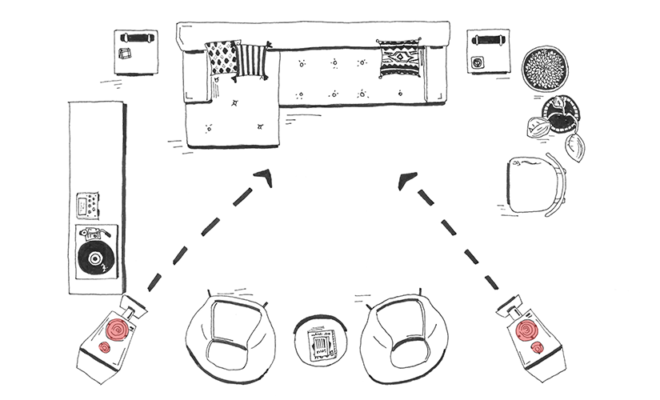 Having illuminated a five-point guide to extracting the best sound from your record player, audio guru Jason Kennedy delves into the fine art of positioning speakers.

While you can put your speakers pretty well anywhere they will fit, and many do, you get better sound out of them if you follow a few simple guidelines. The first thing to consider when looking for the optimal spots for your speakers is the room; it is the most influential factor when it comes to sound quality after the speakers themselves. Put most speakers close to walls and you end up with a boomy, shut-in sound, put them near the corners and this gets even more pronounced. This is useful if you have small speakers that don’t produce much bass but can make for an uncomfortably heavy sound with bigger speakers and bass heavy tunes.

Finding the right placement is a matter of pulling the speakers out from the wall until you get a good tonal balance, one where bass, mid and treble are all at a similar when playing a variety of records. To find a balance that suits your room and your music, try moving them 10cm at a time away from the wall and stop when the bass loses power, then maybe move them back a bit to find an optimal balance. You want to feel the bass but also be able to hear what the bass line is doing; can you hear different bass notes is a good question to ask. If they all sound the same the speakers are probably too close to the wall.

You will also get better results if the speakers are facing the spot where you sit and are at the same height as your ears. Once this is the case you can tweak the balance of the sound by adjusting the angle of the speakers. You get the brightest sound when the speakers point directly at you but it can often be preferable for them to be angled so that the axis of an imaginary line coming from the speakers crosses in front of or behind your head.

If your system sounds brash or hard when you turn it up put the speakers closer to the walls and angle them so that they don’t point toward you. If that doesn’t do the trick then consider getting soft furnishings like carpets and sofas into the room. Hi-fi nuts like myself get carried away with something called imaging. This is what stereo was invented for and simply means that you get a solid acoustic image of say a singer’s voice in front of you; a sense that the singer is in the room in fact. It’s not an essential part of musical enjoyment but when it happens it adds something special to the experience. When you set up your speakers try sitting in the so-called sweet spot – basically in front of and in between them – and play a song with a clear vocal then close your eyes and see if you get the sense of a 3D ‘image’ of their voice in a particular position. If not then carefully adjust the angle of the speakers until this happens.

Quick tip: if your speakers have grilles on, you will find that removing them makes for a crisper, clearer sound. 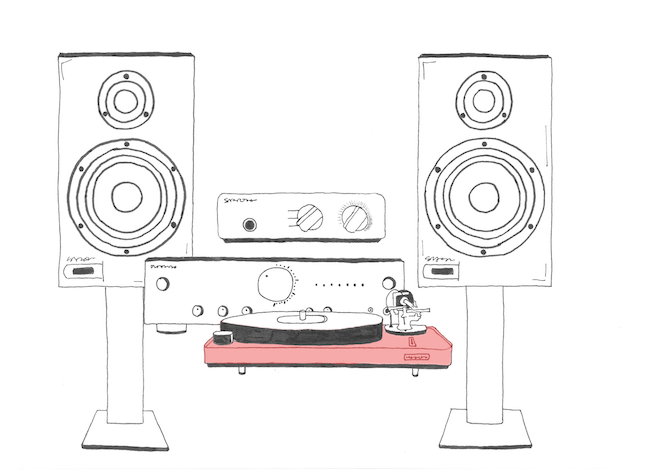 There is a problem with speakers and record players. A record player is designed to read tiny vibrations in the vinyl groove and to do this well the turntable itself needs to be absolutely still and cut off from external vibration. If you put speakers near to or on the same shelf as your record player the vibration of the speakers will undermine the record player’s ability to do its job well. So try to put your turntable on something small that’s not close to the speakers, and likewise put your speakers on stands or wall brackets. With stands and floorstanding speakers there is the question of what to put between speaker and stand or floor. For a long time there has been a theory that you should use spikes that effectively nail the speaker to the floor or stand, but more recently people in the know have discovered that this approach is not only crude but has a negative effect on sound quality.

It seems that what you want to do for the best results is to isolate the speaker from whatever it’s sitting on. This can be done with soft pads of rubber or foam or alternatively with sprung stands by a company called Townshend Audio. The bigger the speaker the greater the effect that isolation has but every speaker seems to time better and sound more open when it’s isolated.

Speaker stands come in a variety of types and sizes, metal and wood being the most popular materials, and each has a character that it adds to the sound. As a general rule the heavier the stand the more solid the sound, so if you want a tightly focused, controlled sound Blu-tack your speakers to a heavy, metal stand. Alternatively you can get a more open and ‘fast’ sound with a lighter stand. That said the interface between speaker and stand is equally critical and if you use sponge pads or similar between the two you will get less of the stand character and a better overall balance. So get your speakers out from behind the sofa or down out of the bookshelf and find a better spot for them, you will be surprised at how much difference it makes. It’s probably the cheapest way of seriously improving the sound of your sound system that there is.

This article originally appeared on TheVinylFactory.